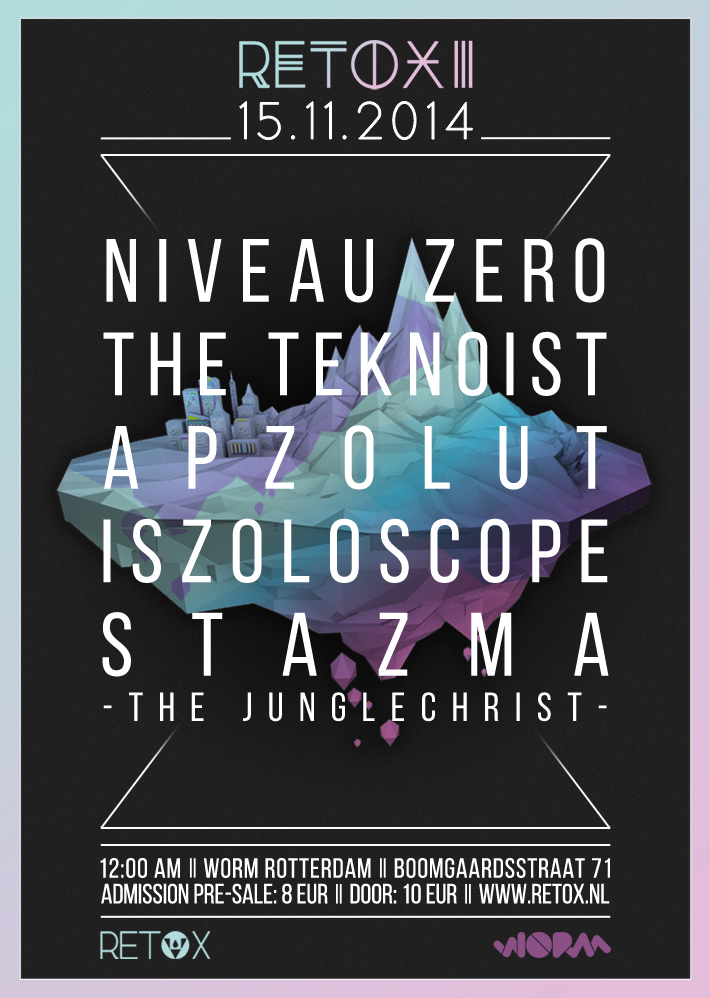 everyone has their opinion about dubstep, what it was, what it is. THIS is what everybody should listen to. and it’s not only dubstep, he brings hip hop, metal and breakcore. Retox brings Frederic Garcia to teach you. One of the biggest names nowadays in the French electronic scene. He knows what a party is, you can not not move your body, even if it’s just a tiny bit when he’s playing. Heavy bass music which will take a hold of you.
https://soundcloud.com/niveau-zero

Miike, what’s left to say? He performed at RETOX I and proud that he’s back for the 3rd edition! He’s a master in mashing up metal, breakcore, drum’n’bass and hardcore. Therefor he’s perfect to perform at RETOX. His last album Tank Alligator is highly recommended and he will for sure play some tracks from this album. You can’t leave the party without seeing this monster play.
https://soundcloud.com/the-teknoist

Julien did the mastering for the first RETOX record. He is known for performing almost naked and playing with his knobs. He’s merging breakcore, gabba, jungle, amen breaks and dubs into one cohesive energetic liveshow. Coming from Lyon, France he has been playing since 2008 across Europe. Will you take your shirt off as well when this Frenchie destroys the dance floor?
https://soundcloud.com/stazma-the-junglechrist

Yann Faussurier has been a friend of RETOX for quite some while. Iszoloscope began in 1999 and since RETOX is about mixing all kinds of different electronic genres, I thought that Iszoloscope would fit right in with his harsh, rhythmic, noise and infused breaks. He is know for his exceptional standard in hybrid electronic music.
https://soundcloud.com/iszoloscope

Apzolut from the Netherlands deserves more credit than he gets at this point. He and his brother (MC Goatzak) will perform at RETOX and blow you away with a sound that’s not explainable. Metal infused breakcore, might involve some grunting, headbanging is optional but.. with his appearance you will probably. It could also be that you will hear some Aruba influences where he grew up or disco or… etc. etc.
https://soundcloud.com/apzolut